Hey all, it's been a long time again. I've been very busy preparing for crops and classes. I started a WOTG club and that is going really well. I've wanted to use flip flaps now for a long time so I finally found the time (and ambition) to do it. I've received lots of compliments on the layout via facebook so I have written up instructions that I will offer to everyone for free. I would love to see everyone who takes the instructions and creates with them to post pictures of them for me to see. Once I get photos in mine I'll post those as well. I have orders for 6 kits so far, I am very happy with that so tomorrow I will get busy making those. Weekend crop retreat this weekend at the Best Western in Liverpool, looking forward to it very much. Enjoy :) 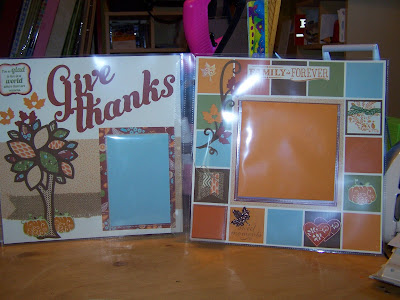 Fall Layout with Flip Flaps (All cricut cuts are from Artbooking unless otherwise stated) Stamp sets used are from the Pathfinding WOTG and Sept. SOTM - Bases are colonial white - Cut tree (Artbooking pg 72) at 8” RDS in chocolate CS - “Give Thanks” pg 72 cut at 4 1/2 “ RDS in Barn Red - Cut 3 pumpkins pg 73 in colonial white and stamp in goldrush (size as indicated on stamp set) 2 for this page, one for the second page - Sponge pumpkin edges with olive ink (I coloured the stem with brown marker) - Stamp “I’m so glad….” Twice, once in olive ink on colonial white and cut out around the inside border. Second one is stamped in barn red ink on barn red CS and cut out around outer border. Use dimensionals to adhere them together. - Use scraps of pathfinding to fill in the leaves on the tree (I used a pencil and traced lightly the inside of the opening in the tree and then cut about an eighth of an inch bigger than where I traced. I then erased the pencil mark and glued it in place. - Cut 2 sets of leaves from pg 72,@ 2 ½” in Barn red and in gold rush (use 3 on this page and 3 on the other page. - Large piece of B&T is cut 5x12 - 7”strip of burlap ribbon - Mat under 4x6 flip flap is cut @ 5x7 - Mats in and under flip flap are cut 4x6 – one is glacier blue and the one underneath is colonial white - Arrange to your base page and glue in place. 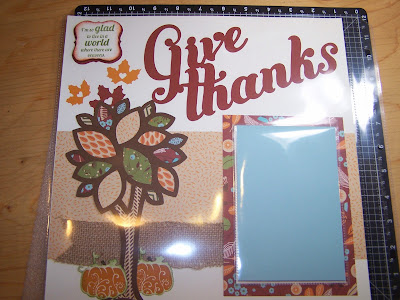 Page 2 Fall layout with flip flap - Cut a 7x7 square of B&T for center of page ( same design as 5x12 from page 1) - 6 ½ x 6 ½ piece of barn red as a mat on it and under the flip flap - Flip flap is 6x6 from goldrush CS - Cut from cricut a leaf flourish from pg 72 @ 2 ½” in chocolate - Cut a single leaf RDS and Multi cut from gold glitter paer @ 1 ½” - All outer squares are 2 ¼ x 2 ¼ - 3 in Autumn Terracotta, 4 in chocolate, 3 in goldrush, 3 in olive and 3 in Glacier, and a piece of colonial white cut at 2x2 - There is a flip flap on the bottom left with a mat cut 2x2 (Autumn Terracotta) - Stamped images are: one leaf from the stamp set (I used sponges and coloured it with 4 different colours, huffed it and then stamped it on colonial white and cut it out, 2 lg hearts in bard red and autumn terracotta on colonial white - Stamp image on colonial white 2x2 with goldrush and glue to one of the chocolate squares and wrap with a piece of ribbon tied in a knot - Stamp “Family is Forever in goldrush on colonial white and cut out as desired, I did it by hand….there may be a special cut on the cricut though  - Stamp “sweet moments” to the bottom of a goldrush square in chocolate ink - A piece of burlap ribbon cut at 1 ¾” cut into a banner as shown in the photo, and 2- ½” pieces of B&T cut at 1 ¼” and the other at 1 ½” both of these cut into banners and glued with glue dots to the burlap and a bow made of hemp twine adhered with a glue dot on top of that. - Glue the 3 reserved leaves to the flourish - I eyeballed the small squares around the large square, glued the small ones done first and the large 7x7 last - The blank small squares are meant for 2x2 photos 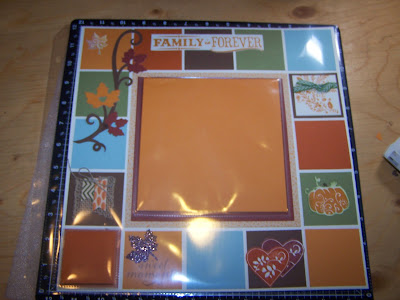 Sue
I've been a CTMH rep for over 7 years now and love it. I love the products and the fact that I get to meet new people and spend time scrapping with great friends. I am a mother of 2 boys, Brandon,20, and Quinten, 16. Married to Moyal since 1992, but we've been together since 1984. I've worked at a local call center for 10 years, but left my job to battle through my cancer diagnosis. I am now a 3 year cancer survivor.